At Blue Medical Center the REHABILITATION AND FIBROMYALGIA service is active for the treatment and rehabilitation of chronic pain, fibromyalgia, incontinence and constipation. The doctor in charge is dr. Francesca Gattinoni.

The term “fibromyalgia” means pain (algos) deriving from muscles (myo) and fibrous tissues (fibro-), such as tendons and ligaments. Fibromyalgia is therefore a rheumatic disorder that affects the musculoskeletal system, characterized by the presence of:

Besides a state of hyperalgesia, many patients present with a series of other symptoms, which include:

Signs and Symptoms of Fibromyalgia 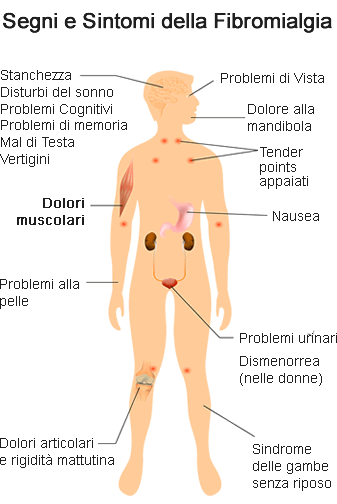 Fibromyalgia may be defined as a “fibromyalgia syndrome”, because particular clinical symptoms and signs may be present at the same time. All these disorders concur in determining the most probable diagnosis, even though not all patients have all fibromyalgia symptoms together.

Furthermore, fibromyalgia is often associated with other disorders, among which:

It is thought that fibromyalgia may be caused by different factors (biochemical, genetic, neurochemical, environmental, hormonal, psychological, etc.). The pathogenesis of the disease is, in fact, a very much discussed issue: there are no definitive data yet, but many research studies are trying to analyze the multifactorial interaction underlying the disease.

In particular, researchers believe that fibromyalgia amplifies painful sensations (or reduces their inhibition), by affecting the way the brain elaborates pain signals. Sometimes symptoms start after a physical trauma, surgery, infections or a significant psychological stress. In other cases, fibromyalgia symptoms accumulate gradually over time, without any single event activating the disorder being evident.